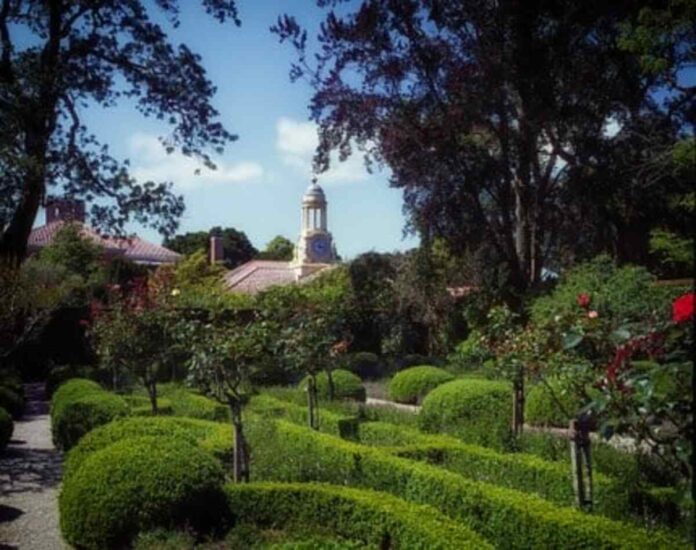 Filoli gardens, also known as the Bourn-Roth Estate, is a beautiful estate and 16-acre formal garden located in Woodside, California. It is situated near the southern end of Crystal Springs Reservoir on the eastern slope of the Santa Cruz Mountains. The grounds have been beautifully landscaped with exquisite formal gardens.

Filoli, also known as the Bourn-Roth Estate, is a historic mansion with six-hundred-and-fifty-four-acre grounds. It is located in Woodside, California, at the southern end of the Crystal Springs Reservoir and on the eastern slope of the Santa Cruz Mountains.

The mansion’s grounds encompass sixteen acres of formal gardens and an opulent ballroom. The house also features nine dynamic event spaces. The Bourns’ interior design philosophy connected the garden with the home, integrating art, architecture, and fresh floral arrangements. This philosophy was continued by their descendants, Lurline and Bill Roth.

The Filoli estate is open to the public. The National Trust for Historic Preservation manages the property and employs approximately 60 staff members and 700 volunteers. Visitors can tour the gardens and purchase items from the shop. There is a resident peacock, Percy. We did not get his picture, but he is an entertaining addition to the grounds.

The Filoli House and Garden have been around since 1915. It has been owned by two prominent families in the Bay Area and is now under the care of the National Trust for Historic Preservation. The property has served as a backdrop for numerous television shows and movies. Today, it is a popular tourist destination where visitors can spend the day walking through the gardens and enjoying the many activities at the estate.

Filoli is an English-style estate and formal gardens located on six hundred and fifty-four acres in Woodside, California. The estate is at the southern end of Crystal Springs Reservoir and lies on the eastern slope of the Santa Cruz Mountains. Filoli is a great place to visit if you enjoy landscaped gardens and traditional architecture.

The National Trust carefully restored the gardens which are home to many rare plants. A large rectangular pond surrounds the grounds. The garden also has a Christopher Wren-style clock and an orchard that once spanned ten acres. The orchard grew vegetables, fruits, and flowers, and the house used the produce to feed guests.

Visitors can visit the Filoli Estate and its formal gardens on a self-guided tour or join a two-hour docent-led tour. A highlight of the grounds is High Place, the southernmost point of the grounds, which offers a panoramic view of the grounds. William Bowers Bourn II, the man who built the estate, inherited a beautiful legacy from his father. His motto was “Fight for a just cause.”

The Filoli Estate was originally built as a private residence but was opened to the public in 1977 as a 501(c)(3) nonprofit organization and National Trust for Historic Preservation. It is considered one of the most pristine examples of an English-style country estate from the early 20th century. The estate features a 54,000-square-foot Georgian revival mansion, 16 acres of English Renaissance gardens, a 6.8-acre Gentleman’s Orchard, and eight miles of hiking trails.

The Ballroom at Filoli Gardens is the perfect setting for a formal wedding or another special occasion. Set in a 16-acre formal garden and 654-acre estate, the Filoli is located in Woodside, California, near the southern end of Crystal Springs Reservoir and on the eastern slope of the Santa Cruz Mountains.

The Filoli Ballroom is an elegant space with 22-foot ceilings and walls that are water-green in color with gold leaf details. It boasts magnificent crystal chandeliers, including one replicating the Hall of Mirrors at Versailles. The crystal drops in the chandeliers are amethyst-colored. The ballroom has a standing capacity of 200 and a built-in stage. Aside from the ballroom, there’s the Quail’s Nest Cafe, a cozy nook in the woods. The restaurant offers special fare and an enchanting ambiance.

The Filoli Gardens are 16 acres of formal garden set in a 654-acre estate. They are located on the eastern slope of the Santa Cruz Mountains in Woodside, California. Filoli is also known as the Bourn-Roth Estate. The gardens and the estate are open to the public for tours.

Filoli Gardens hosts several events throughout the year. Its annual Flower Show is in June and features beautiful floral arrangements, special table settings, and live music. There are also tours of the greenhouses and educational exhibitions. The theme for the 2018 Flower Show is “Time Began in a Garden: A Centennial Celebration.” Guests can attend special events, such as an opening night preview party and a Champagne Tea service.

The Filoli Gardens are a National Trust property open to the public. The gardens are a fine example of country estate landscaping in California, and the estate is a California Historical Landmark.

Filoli Gardens is an estate and 16 acres of formal gardens located in Woodside, California. The property is situated on the eastern slope of the Santa Cruz Mountains, at the southern end of Crystal Springs Reservoir. The grounds are set amid a natural habitat that has a unique climate. The property is open to the public to enjoy.

The estate has a variety of mature trees, including an impressive row of ancient Italian Stone Pines. The grounds also include many specimens of native Coast Live Oaks, about 250 years old. The estate was the setting for many films, including the 1997 movies “George of the Jungle” and “The Game.” The photographs taken by Stackpole of the Filoli estate feature the estate’s landscape during its time under William P. Roth.

Filoli’s grounds are home to various art exhibits and sculptures. Guests can browse and purchase garden art, garden decor, and wearable art at the Art Walk. Visitors can also view works by Kristine Mays, known for her graceful wire sculptures. In addition to the art exhibition, visitors can relax in the Woodland Garden Court.

The Filoli gardens have a spectacular rose collection, and the roses are treated organically to keep them smelling their best. With over one thousand volunteers working to keep it in perfect condition, the garden is filled with hundreds of varieties. Roses are planted in neat rows with boxwood edges, allowing visitors to view the flowers up close and take unlimited whiffs of the perfume.

Filoli Gardens was originally built in 1936 by Agnes and William Bourn. They incorporated art, architecture, and fresh floral arrangements into the design. The gardens were expanded during their lifetimes, and the Roths continued to throw lavish fetes.

If you’re planning a family outing this October, make plans to visit Filoli gardens for its Fall Celebrations. The gardens host several hands-on activities and surprises this year to help visitors celebrate the harvest season. The early bird sale for this year’s event ends October 21, 2022, so you’ll have plenty of time to plan your visit.

The Fall Harvest History Festival includes kid’s activities and a costume party. During Halloween, check out the ‘Monster Bash’ in Rengstorff Park, complete with a haunted house, live music, and pumpkin-picking. In addition, the Paly Theatre hosts “Something Wicked This Way Comes,” an outdoor interactive play with puppets. You can also visit the Great Pumpkin Fest hosted by California’s Great America theme park, complete with a pumpkin patch, carving, and games.