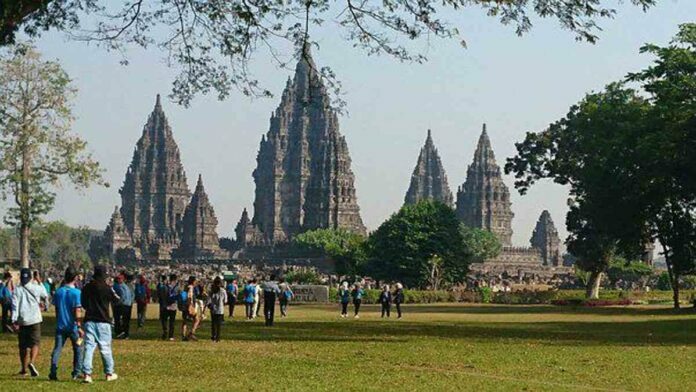 One proof of the spread of Hinduism in Indonesia is the Yogyakarta Temple Prambanan, which has become the most famous historical tourism spot in Yogyakarta. Furthermore, the largest Hindu temple in Indonesia is also known as Roro Jonggrang Temple, founded around 850 AD.

There are hundreds of temples in the Prambanan complex, but some of the pairing temples are still in ruins. The splendor of the historic building can be seen from the main temple on the first page. What are these temples?

Prambanan complex is often the first choice of destination for tourists who visit Jogja. The location is in Bokoharjo Village, Prambanan District, Sleman. This one of the World Cultural Heritage has 3 yards with concentric or centered patterns.

To trigger your enthusiasm while learning its history, let’s learn more about some of the most famous temples in the Prambanan complex!

Prambanan Temple is one of the Indonesian attractions that highlight the splendor of the Shiva Temple, which is a 47 meters main building. This main temple has a mistake peak which symbolizes lightning and diamonds.

There are four large chambers containing different statues. The central statue of the Shiva temple is in the east chamber. The next one is the Agastya statue on the south side, the Ganesha statue on the west side, and the Durga statue on the north side.

The Brahma Temple is similar to the Shiva Temple but smaller. It’s not too tiring to go around this building because there is only one staircase and one cubicle. The room contains a statue of Brahma.

Furthermore, the Vishnu Temple stands firmly, whose building is almost the same as the Brahma Temple. If you climb into this temple, you will only find one room in which there is a Vishnu statue. There is only one staircase, and it’s not too high to climb.

There is a building in front of the Vishnu Temple, namely the Garuda Temple. In Hinduism, Garuda is a vehicle for Lord Vishnu that has the face of a bird and a human body. There is one entrance staircase and one empty chamber in this temple.

In Hindu mythology, Nandi is the oxen of Lord Shiva. Nandi Temple is in front of Shiva Temple, facing west. There is a statue of Nandi in the cubicle of the building.

Angsa (swan) is the mount of Lord Brahma. Angsa Temple was built in front of Brahma Temple and is equipped with an empty room.

There are 4 Keller temples located on the east, west, north, and south. This building is symbolized as a repellent to danger from all directions. Keller Temple is not equipped with stairs to enter.

In the Prambanan complex, Apit Temple is a building flanking two rows of temples on the west and east sides.

Sudut temples or corner temples are located in the 4 corners of the central courtyard. The buildings are small and have no entrance.

Prambanan Temple is a must-visit destination when traveling to Yogyakarta. The splendor of the main temple and its surrounding temples can be experienced directly. Not to mention the beauty of the temple reliefs full of meanings.

Read also: How to simplify rolling out your debts? Basics of debt consolidation

2 Day Diet Pills – Dark beer Safe and Do They Perform?

Quick Ways On How To Lose Weight Properly